The level of control chemistry is reaching in the synthesis of graphene is mind-blowing. At the Department of Physics in Basel University, together with the University of Bern, Warwick and Lancaster, nitrogen-doped porous graphene nanoribbons (N-GNRs) were synthesized for the first time. 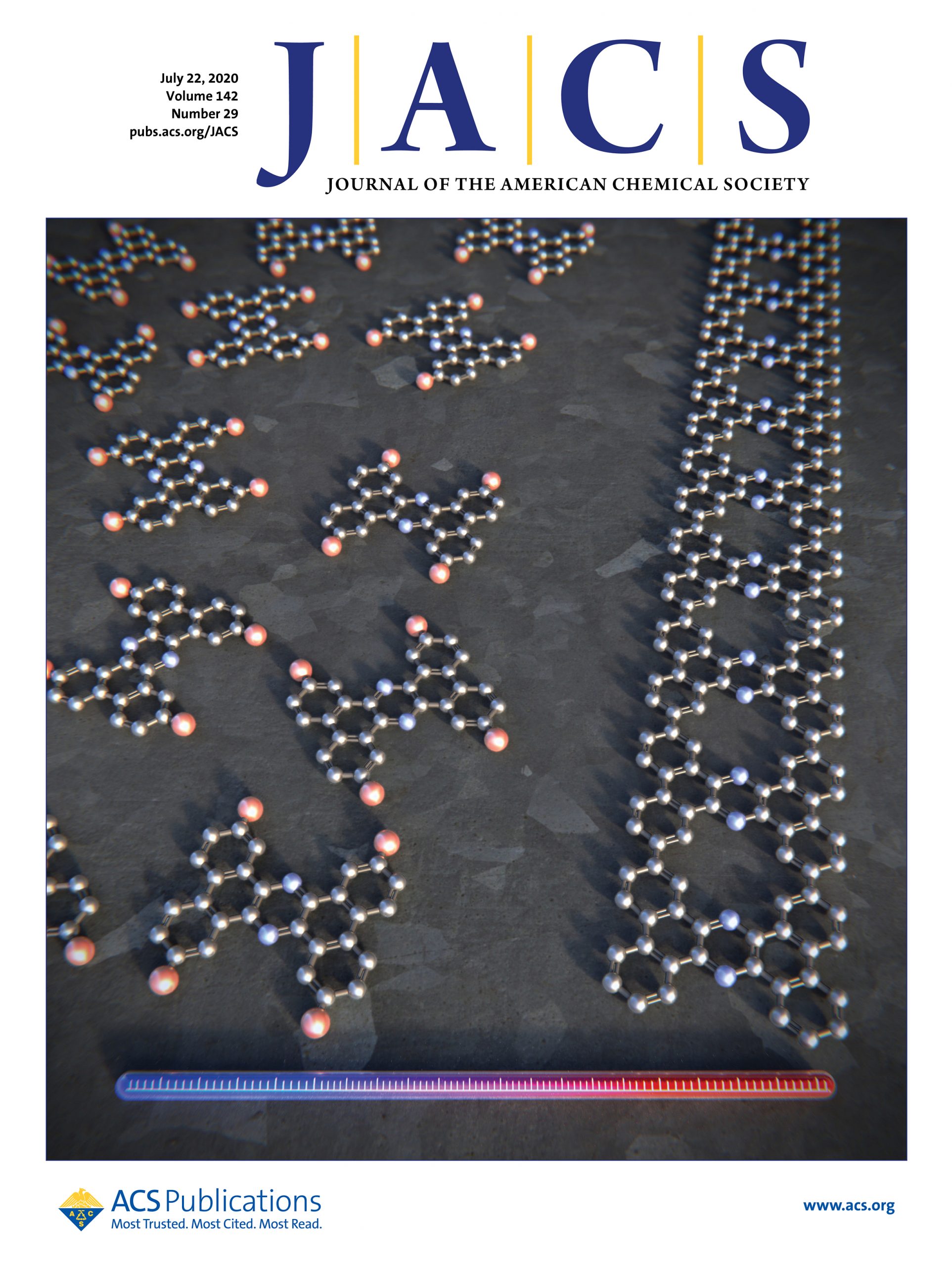 These N-GNRs are ladder-like molecules whose crystal lattice contains both periodic pores and a regular pattern of nitrogen atoms. And interestingly, these molecules don’t behave as conductors, as graphene does, but as semiconductors, making them very attractive in electronic applications.

We did this picture to illustrate the synthesis of the N-GNRs on request of Prof. E. Meyer and under the close supervision of Dr. Shi-Xia Liu.

It seems that quantum technologies never sleep. Researchers are bringing new improvements and solving impossible challenges every day. In this case the good news came from our friends at Basel University. Together with the University of Hanover they’ve came up with a way to produce a strong coupling between two quantum systems over a distance. 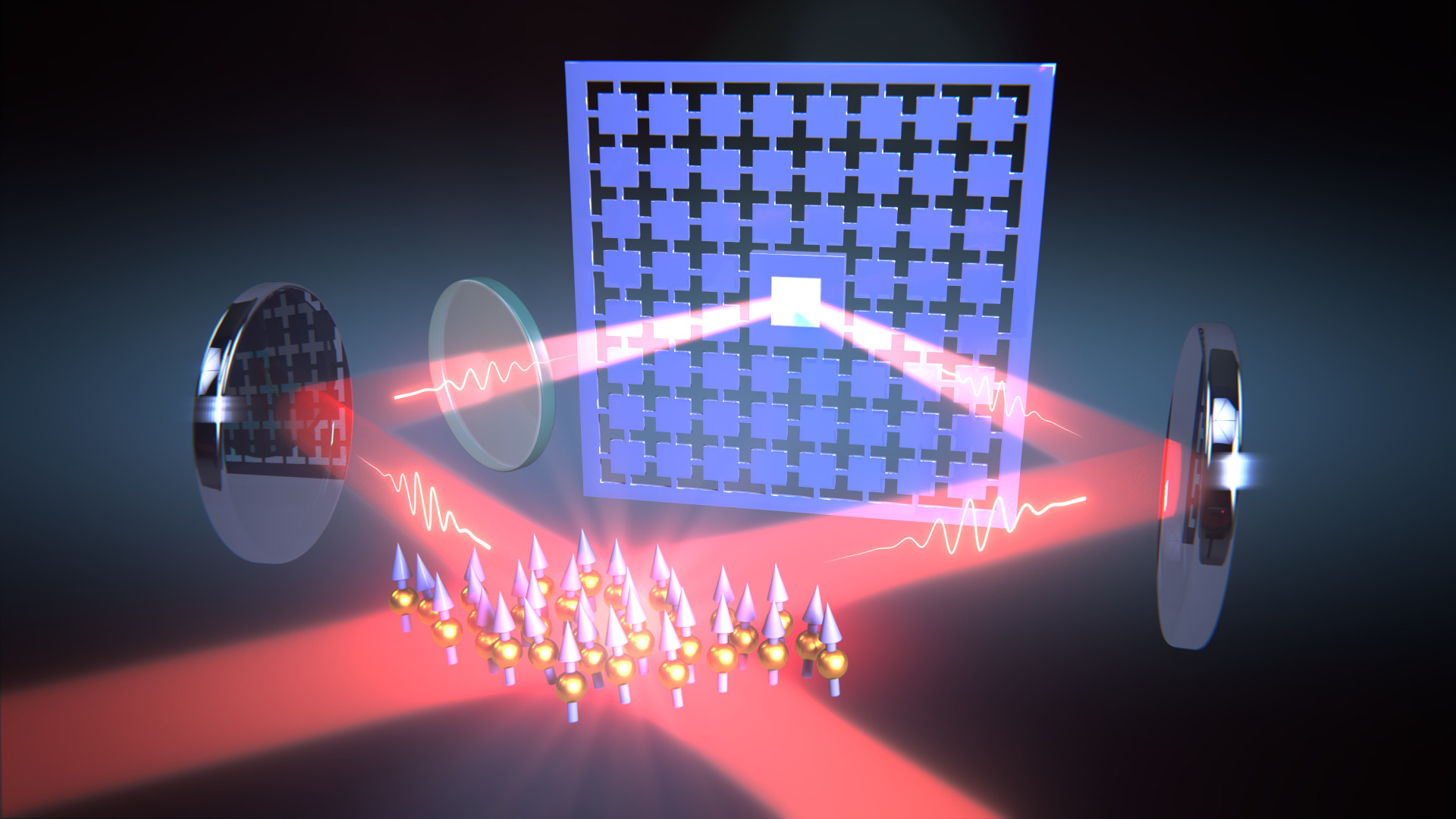 Strong coupling between quantum systems is essential for quantum technologies to work, for instance to create quantum networks. Until now, for two systems to be strongly coupled, they both needed to be really close and in highly controlled environments where they could interact via electrostatic or magnetostatic forces.

For the first time, a team of physicist led by Prof. Philipp Treutlein, form the Department of Physics at Basel University, has succeeded in the creation of a strong coupling between two systems at large distances and at room temperature. In particular, they’ve used laser light to couple the motion of the spin of atoms over 1 meter [read more].

We made this picture for them to illustrate the process. This research has been published in Science.

Quantum technologies building on solid-state spin systems, as those used in quantum computing and quantum internet, require unprecedented levels of stability. Even small fluctuations in ambient magnetic field messes up with the coherence time of these systems. So for these technologies to have any future we first have to learn how to stabilize and protect individual quantum ensembles. Doctor (congratulations on that) Johannes Koelbl at Basel University, has spent quite some time dealing with this challenge. 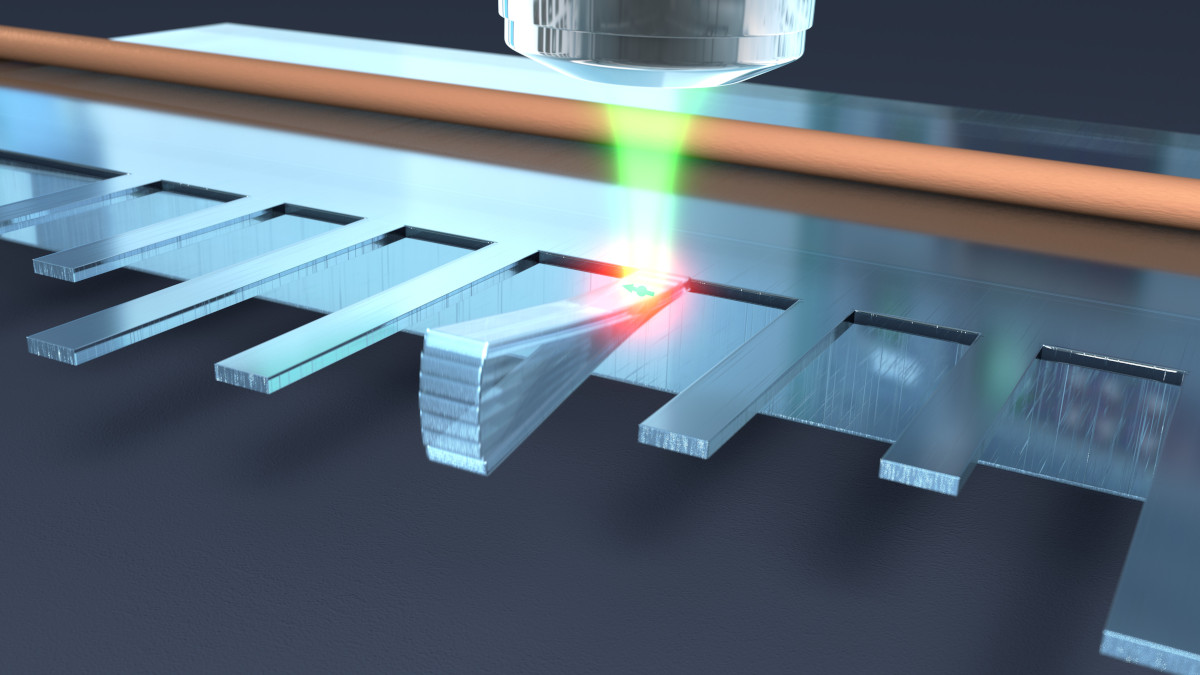 In this picture we made for him it is shown a Nitrogen-Vacancy center spin embedded in a diamond mechanical cantilever. As Dr. Koelbl explains: “To enhance its coherence properties, the spin is driven by both a time-varying strain field and microwave magnetic fields. The strain field is caused by harmonic oscillations of the cantilever, while the nearby wire serves as a near-field microwave source. Optical manipulation allows detecting the improved spin properties.”

He has chosen this picture to appear in the cover of his thesis manuscript.

Friction between surfaces is of great importance and it is at the core of numerous and different phenomena: from earthquakes to the development of microelectromechanical systems. A new work involving Germany, Switzerland and Spain have studied how the role of contact aging affects this friction. In particular, they’ve shown how thermally activated bond formation dramatically changes the friction strength over time. 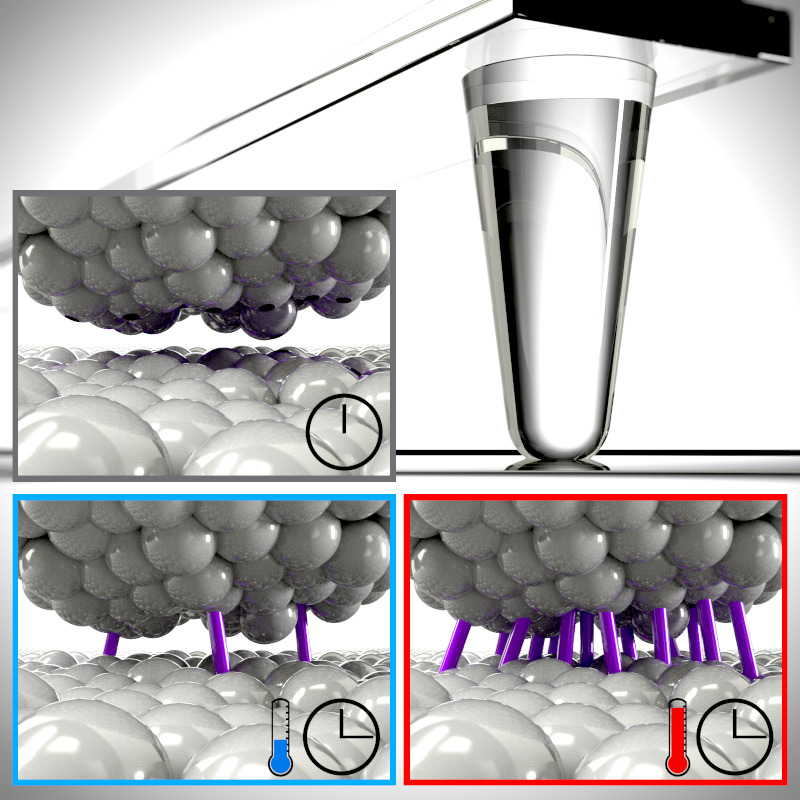 They’ve published their findings in Physical Review X and its work, together with an image we designed for them (with the close supervision of Dr. Guilherme de Vilhena) appears today (3/12/19) in PR-X featured papers.

Soon-to-be-a-doctor Lucas Thiel has illustrated his PhD manuscript cover with the picture we did a few weeks ago. It looks really great! 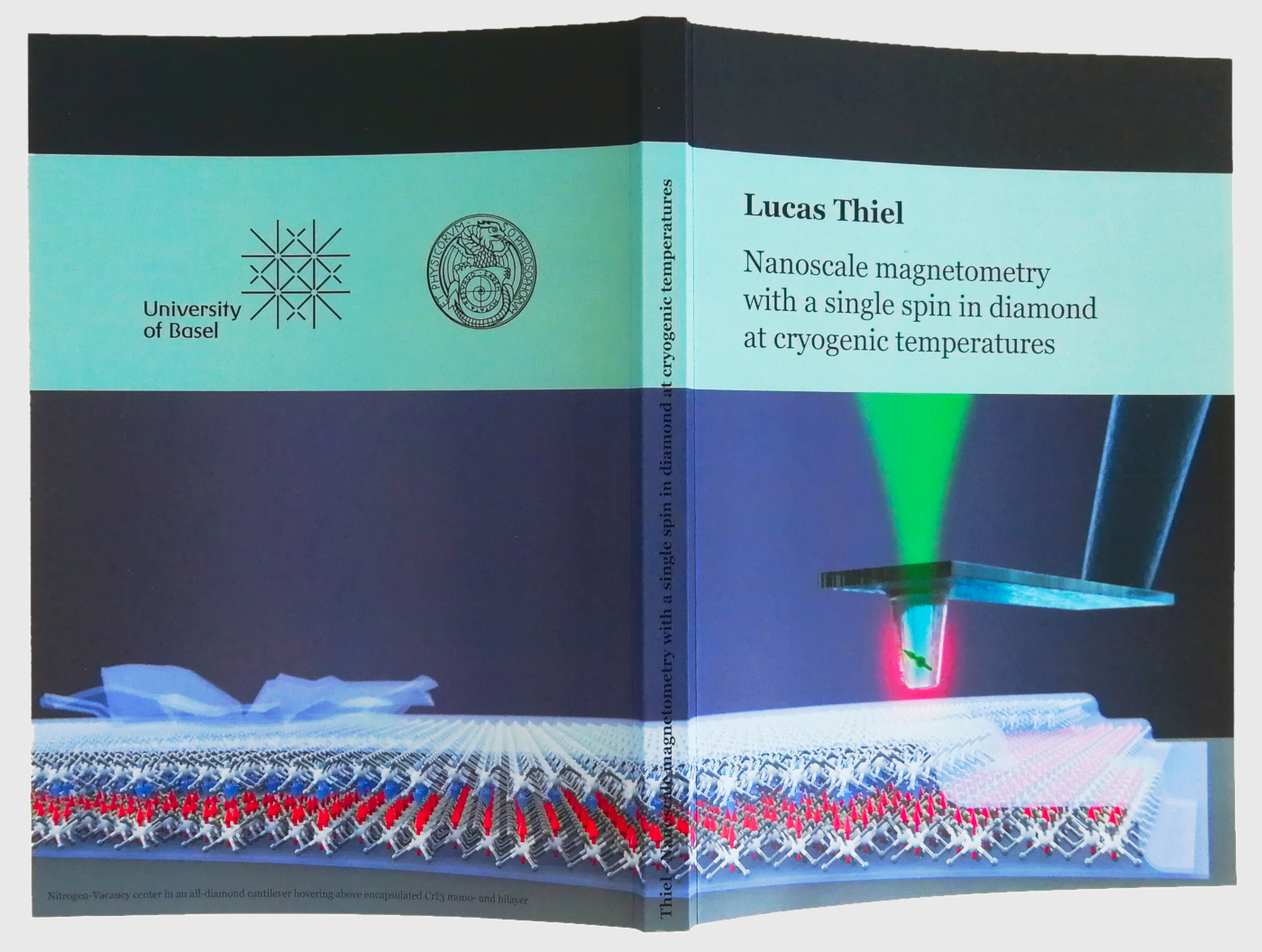 We’ve talked about Prof. Dr. Patrick Maletinsky’s research ([1], [2]) in several ocasions. His research group is excelling at the development of new microscopies. Recently they’ve pushed the envelope another step further by for the first time “measuring the magnetic properties of atomically thin van der Waals materials on the nanoscale”. 2D materials are going to play a key role in the next technological revolution. And the we need tools to study and characterize these systems.

Quantum Sensing Lab together with several groups at the university of Geneva, have determined the magnetic properties of single atomic layers of chromium triiodide (CrI3). 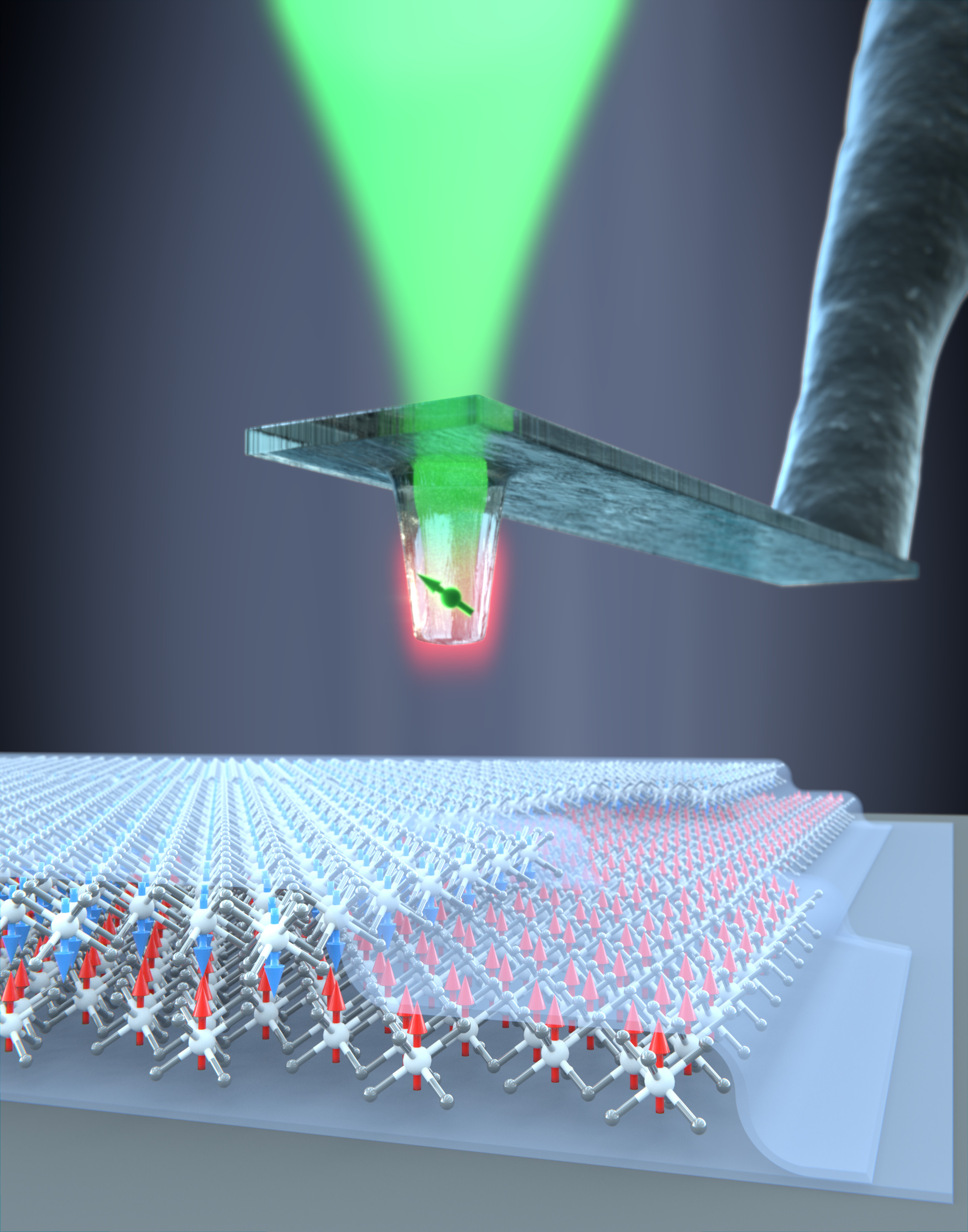 By carefully doing this, they’ve found that the magnetic properties of this material depends on the number of layers of CrI3: an even number of layers produces no magnetic fields while an odd number of them, produces the same fields as a single CrI3 layers. This results have been published in Science.

We made this picture to illustrate this amazing step forward with the help of Patrick Maletinsky and Lucas Thiel. [Read more at UniBas]

Imagine a bulk of metal (titanium, zirconium and nickel) at 1100ºC flowing from a crucible and getting in contact with a cold fast spinning wheel. In principle, it sounds like a bad idea. And it is also the way the team lead by Dr. Laurent Marot produces amorphous metallic ribbons. Their main areas of application are transformer cores and active solder foils. 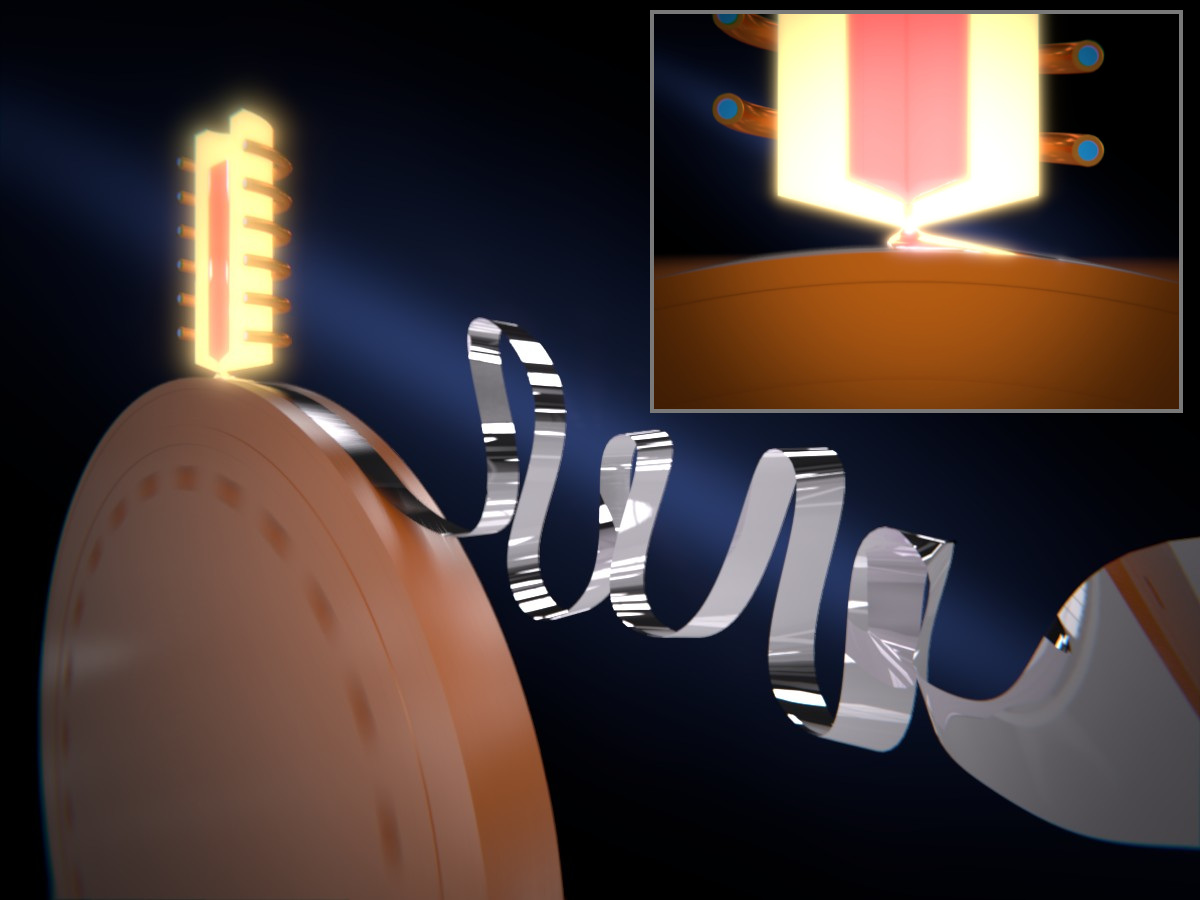 The company Endress+Hauser came to the University of Basel, looking for a solder foil that met its requirements. Basel University developed and is still improving this production method, reaching high levels of quality and reducing the process energy cost. According to Laurent Marot: “The cooperation is beneficial for both sides. Endress Hauser gets high-quality metallic glasses that they can use in their production of pressure sensors, and the university can use the revenue to finance their research. “

We did this picture, supervised by Dr. Laurent Marot to illustrate the process.

Here we have another breakthrough in our understanding of the DNA molecule. And this time it comes from people we particularly like. Physicist at Basel University have been able to study the dynamics of DNA at low temperatures using atomic force microscopy: cryo-force spectroscopy. With this technique it is possible to measure the bare underlying forces and interactions that join the molecule together. Their findings have been published in Nature Communications 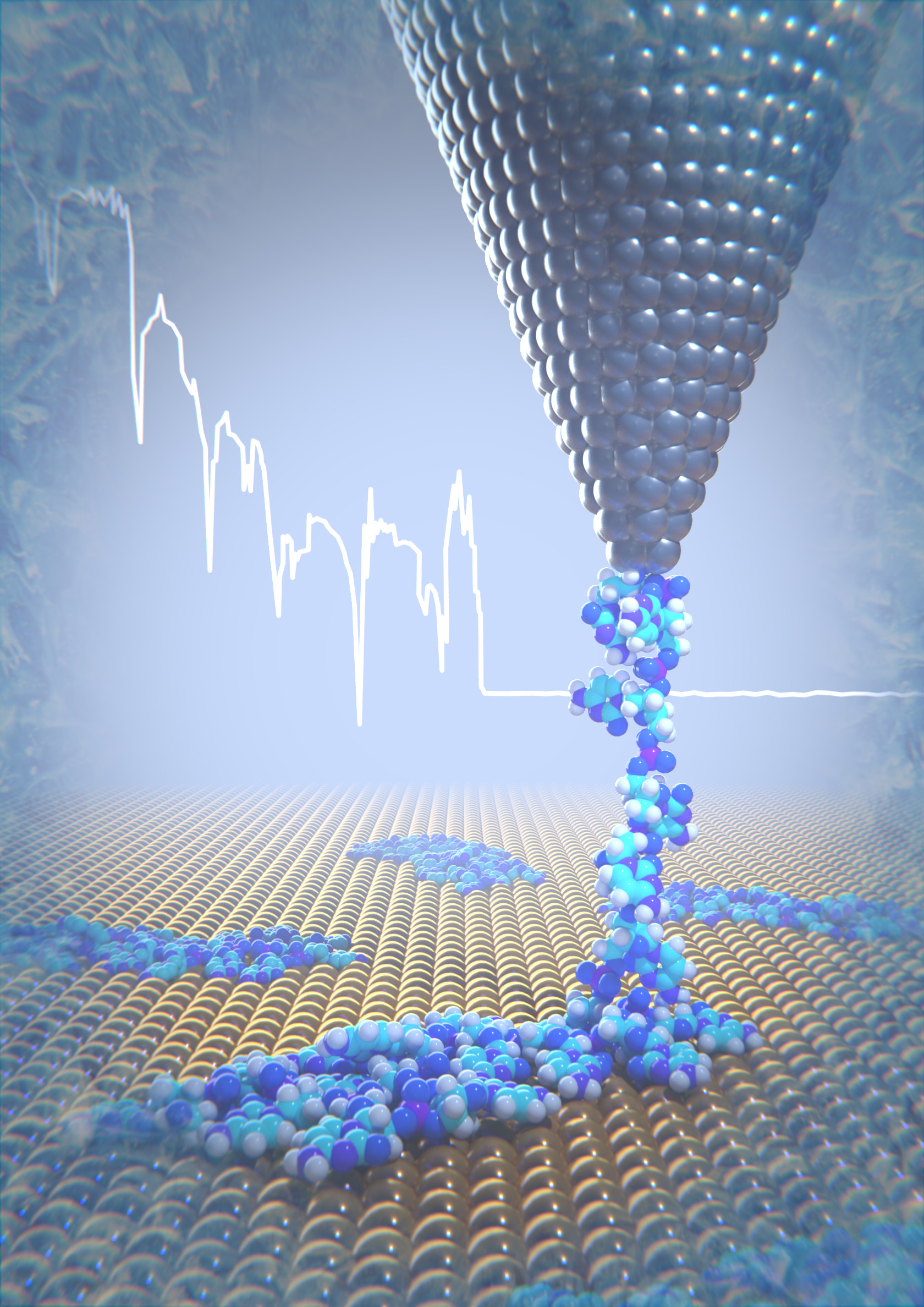 Prof. Enrst Meyer, together with researchers from Germany and Madrid contacted us to make this picture that illustrates the process of stretching while detaching the DNA molecule from a gold surface.

Our story with Basel University and in particular with Prof. Thomas Jung, goes back a long way. They are not only really nice people. They always come to me with amazingly beautiful pieces of research.

This time, Prof. Jung, together with Aisha Ahsan, have reported a new method that allows to change the physical state of just a few atoms or molecules within a network. Their efforts are focused in the manipulation of tiny molecules. The smaller the better. Why? Because this systems are perfect candidates for data storage. And the smaller the bits (molecules), the less energy it will take to modify them. 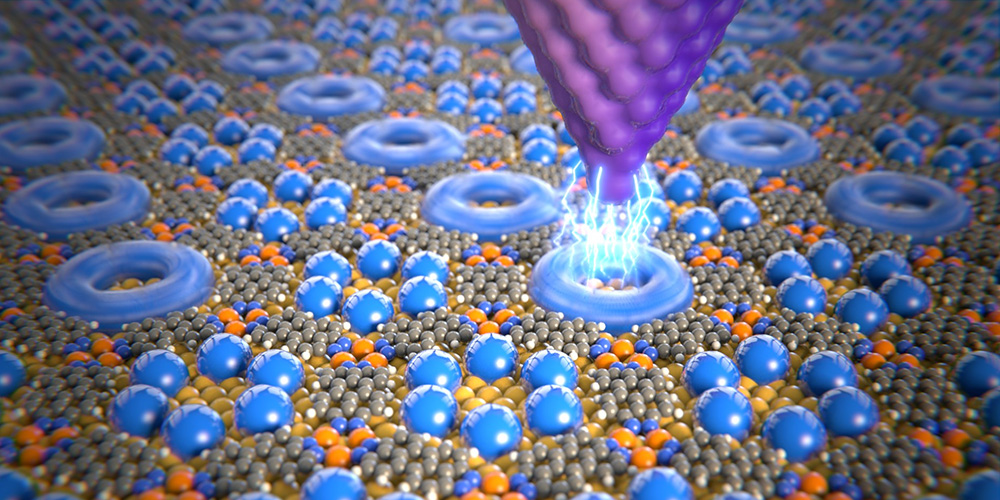 We did this picture to illustrate their research and also an animation that appeared in the video abstract of the paper.

You can read more here.

Early this year, Prof. Shigeki Kawai asked me to make a picture illustrating his new achievement. He, at NIMS (Japan), together with a team at Basel University, had succeeded at detecting single atom impurities in graphene ribbons. 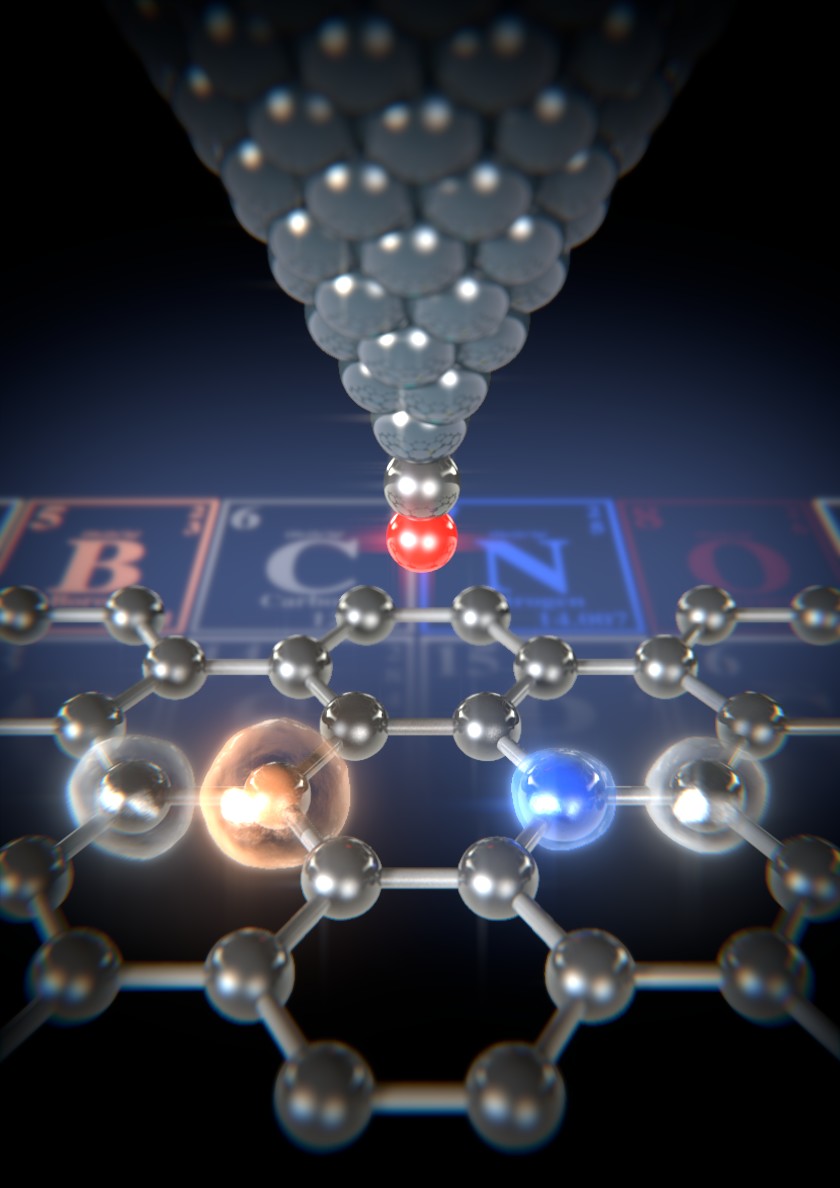